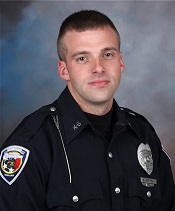 Sergeant Benton Bertram was killed in a single-vehicle accident during a 30-mile pursuit, which began upon him observing a speeding vehicle being driven in the opposite lane of traffic on State Road 3.

As the pursuit approached State Road 3, in Scott County, Stop Sticks were deployed again. The unmarked squad car of Sergeant Bertram left the roadway and struck a tree in the front yard of a residence, where he was pronounced dead at the scene.

The 35-year-old male, who was driving a vehicle stolen from a Circle K convenience store in Charlestown, fled the scene toward Madison but was later apprehended. He was charged with resisting law enforcement causing death, auto theft, escape and driving while suspended. He later pleaded guilty and was sentenced to 30 years in prison.