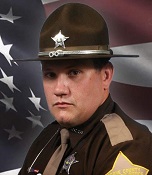 Officers with the Lebanon Police Department were attempting to serve a warrant on a female subject on Yates Street. While there, a 28-year-old male known to police was seen in the area who had active warrants for auto theft and possession of a syringe.

When ordered to stop, he got into a vehicle with two other male subjects and fled the scene, during which time Deputy Pickett joined the pursuit. Over a mile away, the other two subjects exited the car and during a foot pursuit on Indian Springs Road, shots were fired and Deputy Pickett was struck in the head as he cornered a building.

Deputy Pickett was taken to Witham Memorial Hospital, then airlifted to St. Vincent Indianapolis where he became an organ donor after he died three days later.

The subject who was initially ordered to stop fled again in the vehicle and was taken into custody after a second pursuit. In January 2021, he was sentenced to 42½ years in prison for dealing in methamphetamine and resisting law enforcement.

The 21-year-old shooter, who was shot and wounded, also had outstanding warrants. He later pleaded guilty to murder to be spared the death penalty. In May 2019, he was sentenced to life in prison without parole. He was also sentenced to six years for possession of methamphetamine and one year for resisting law enforcement.

A 21-year-old male who provided the firearm used by the shooter was also charged with murder. He later pleaded guilty to dealing in methamphetamine, providing a firearm to an ineligible person, miscellaneous drug charges and was sentenced to 46 years in prison.